The neshnabémwen has endured through the passage of time. At one time, it is said that we all spoke the same language. Later on we started speaking different languages and forming tribes based on who was able to understand each other.

The Bodwéwadmi, Ojibwe and Odawa were all one tribe and spoke the same language. As the differences in the language grew, they each formed a separate entity. However, they maintained a close bond and formed the Council of the Three Fires to deal with any issue that might affect the three tribes. The Three Fires signified the alliance between the three, while their individual fires proclaimed their own identity.

So oral history tells us that numerous changes in Neshnabémwen have occurred throughout our history. It is so today among Bodwéwadmi people. We have people in Indiana, Oklahoma, Kansas, Michigan, Wisconsin and Canada. Because of being scattered arount the country, Bodwéwadmi people speak several dialects according to geographic areas.

Books One and Two – The Old Potawatomi language and this book – contain the language that is spoken predominantly in Forest County, Wisconsin. This book is shorter but it deals with more useful phrases. Sometimes, we denote how some words are said in the Prairie Band.

This year we again held our language classes in the woods, in an area where fifty years ago the Bodwéwadmimwen was the first language of all the homes.

I would like to acknowledge Mary Wensaut and my sister, Mary Jane Thunder, for their support and help in our language classes. Both are very fluent in Bodwéwadmi and have a good knowledge of Odawa as well. Also, Kim Wensaut, who has refused job offers so that she might devote her time to the Bodwéwadmi language. Last year I did all the writing in class; this year Kim did all the writing. Is that progress or what? I cannot thank these people enough for their loyalty and support. Kim also does all the technical things that have to be done. Mostly on our garage sale equipment! And most of all, the enthusiasm of the students as they tackle very complex Bodwéwadmi words, makes it all worthwhile. Migwėtth to everyone for the food and to Mike Alloway for providing us with wood and to the Tribal Council for their support of our program. Nin sé, Bémwétêk. 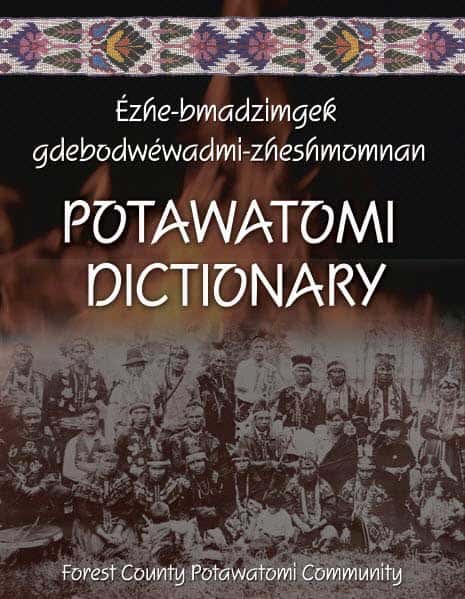